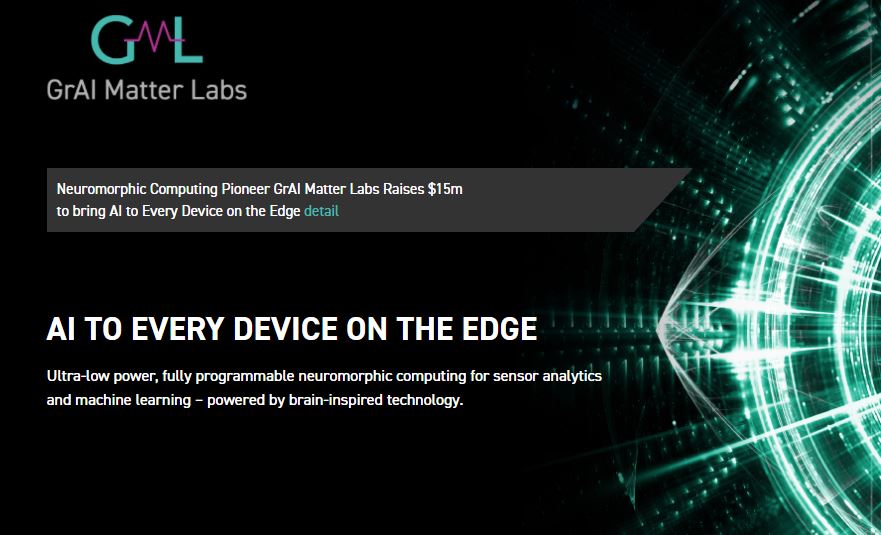 PARIS–(BUSINESS WIRE)–GrAI Matter Labs, a pioneer of ultra-low power neuromorphic computing, today announced it has closed its Series A financing round of $15 million. Inspired by the biology of the human brain, GrAI Matter Labs’ technology will be implemented as programmable application processors which can bring AI with machine learning capabilities to every device on the edge. The consortium of investors is led by iBionext and also includes 360 Capital Partners and 3T Finance.

A New Paradigm in Computing

GrAI Matter Lab’s technology is based on breakthrough research carried out at the Vision Institute (UPMC) in Paris on the human brain during the past 20 years. Inspired by the human biology, the company’s unique neuromorphic computing paradigm overcomes the limitations of Von Neumann machines, offering massively parallel and fully programmable sensor analytics and machine learning at significantly reduced power consumption.

“Our neuromorphic approach to computing and machine learning achieved impressive results in a hardware/software prototyping project under a DARPA grant. The prototype demonstrated how a new compute paradigm could enable AI completely locally on an edge device without cloud computing support,” said Ryad Benosman, co-Founder and Chief Scientific Officer of GrAI Matter Labs.

AI to Every Device on the Edge

“GrAI Matter Labs is pushing the boundaries for silicon compute and machine learning architectures based on learnings from biology and the human brain. We are thrilled with the future prospects of GrAI Matter Labs and look forward to grow the company to become a disruptive force in how AI can be leveraged in ways never thought possible,” said Bernard Gilly, Chairman of iBionext.

“By being able to bring AI to every device on the edge with our low-power neuromorphic compute platform, we can enable entirely new use models and applications for smart computing. This Series A round of financing will help us to ramp our engineering teams in Eindhoven and Paris, and to move rapidly from technology development to market deployment,” said Ingolf Held, CEO of GrAI Matter Labs.

GML has offices in Paris, Eindhoven, The Netherlands and Silicon Valley. The company is driven by a team of visionary and seasoned engineers, and is backed by leading investors including iBionext, 360 Capital Partners and 3T Finance. More information can be found at www.graimatterlabs.ai.

Created in September 2015, iBionext is a management company and a start-up studio dedicated to the development of innovative start-ups in healthcare. This initiative, launched by Bernard Gilly in 2012, aims to transform technological breakthrough ideas into leading innovative start-ups in the fields of HealthTech and related industrial applications. All these companies are grouped on a single site named the “Passage de l’Innovation” in Paris, France.

iBionext Growth Fund was created in 2016 to finance the growth of new companies selected within the iBionext network.

To find out more: https://ibionext.com/

360 Capital Partners is an early stage Venture Capital firm investing in disruptive deep-tech & digital innovations across Europe. The firm has a 20-year track record in supporting talented technology entrepreneurs achieve their ambition of creating game-changing enterprises. 360 Capital is led by a diverse, and experienced group of professionals across Paris & Milan with over €300M of assets under management and an active portfolio of over 50 companies.